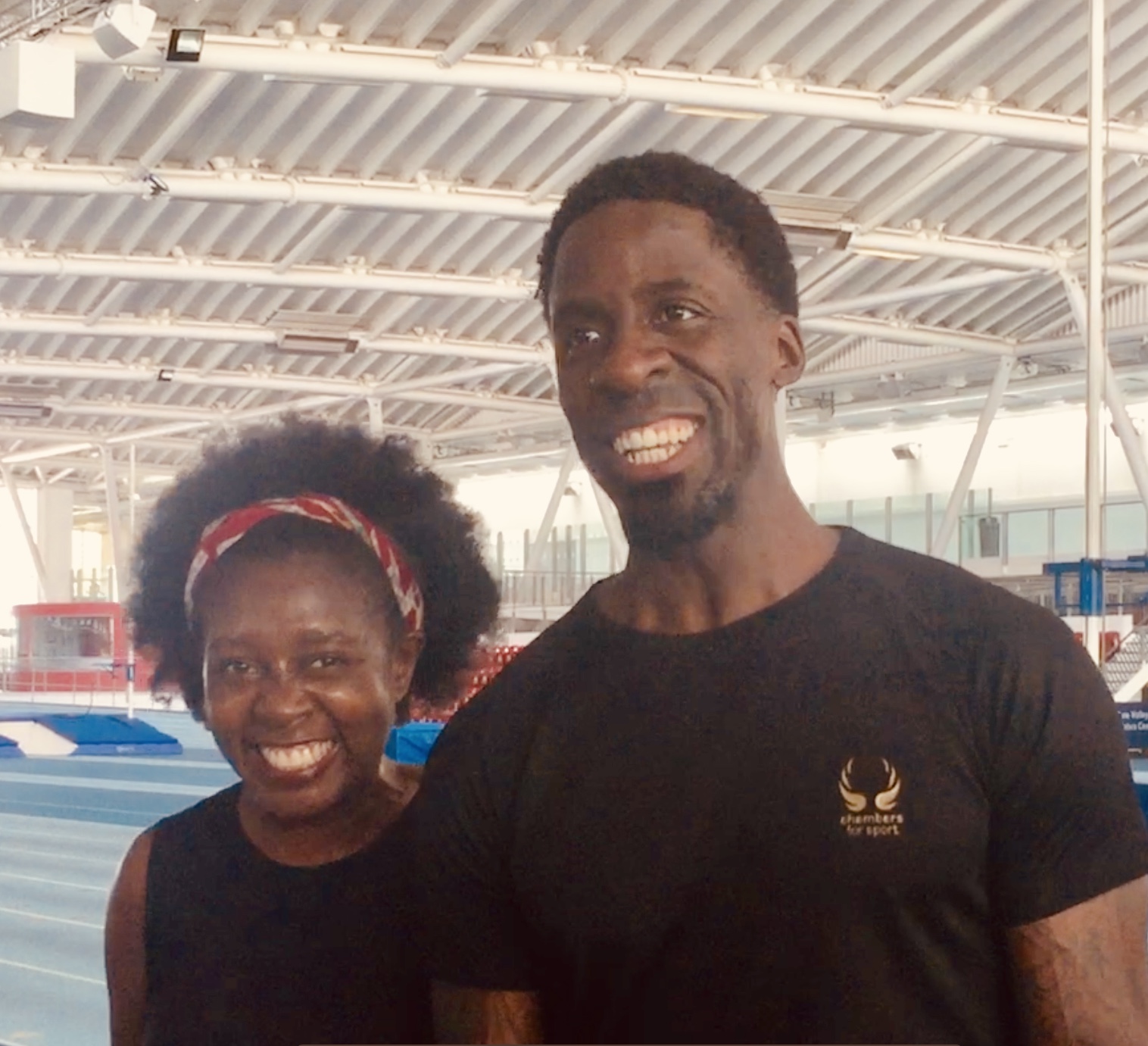 Dwain Chambers wearing pieces from his own athleisure clothing line

In my blog post dated 30 June 2018, I talked about Ascot Ladies Day 2018 and my search for a personal trainer.  You can read that by clicking the following link.

If you have read that blog post already you will know I emailed Dwain Chambers about personal training and was waiting to hear back.  In the absence of an initial response, I assumed that the usual had happened and that he was not interested so I got on with life.  To my delight and surprise, however, I had a response on 6 July 2018.  It was a crazy busy week at work so all I read was the email title and I had no time to actually look at the body of the email as I was out on a training course on Saturday 7 July.  I was shattered at the end of the training day and did not check the body of the email until Sunday or Monday when I found that Dwain’s PA had responded.  After some back and forth which included completing and returning a health questionnaire, we settled on a day.

In the run-up to my first session, the plan was to maintain regular gym attendance or exercise or step it up if I could.  Things did not go to plan in the run-up in terms of the exercise regime but I did manage to attend the Lee Valley Athletics Centre to meet up with a friend a couple of times.   We had made arrangements to meet there to do some speed work and generally improve our running but both meetings ended up being socials.  On the first day that we agreed to meet, I noticed Dwain Chambers walking around looking as casual as you like.  My friend who has lived in Enfield for a very long time explained that Dwain has lived in the Borough for years and has always been down to earth and friendly.  On that first occasion, he waved back when I waved at him but on the second occasion he waved back and confirmed that he would see me at the first training session. Happy days!

Dwain was punctual but unfortunately, I was not.  Lee Valley Athletics Centre is an awkward place for me to get to from where I live so rather than struggle with multiple trains and busses, I decided to book a taxi.  The taxi driver it transpired was unfamiliar with the area.  He took a long way round and with his English on the poor side, there was nothing that my friend, Taiwo and I could do to help him out with directions.  Accordingly, we arrived at the centre in the nick of time.  By the time I finished paying for my entry ticket to use the facility, it was a few minutes past the hour and I was actually late.  As I scrambled around looking for my purse to pay the entrance fee I could see Dwain sitting down looking cool, calm and collected as he waited for us.

Dwain Chambers has lost none of his lock-up-your-daughters sexiness and could pass for a man half his age. He is taller and slimmer than he appeared on TV and still looks like a full-time athlete even though he announced his retirement two years ago, I believe. He was well dressed in an all-black ensemble of two pieces from his own sportswear/athleisure line but he does not appear to be metrosexual at all.  This will be a good or bad thing depending on how dedicated you are to fashion.  I had a sneaky peek at his YouTube channel and social media beforehand.  Okay, I am lying.  I binge watched ALL the videos on his channel and in some of them, his outfits were more PE teacher than sex symbol.  What can I say; not even celebs can win all the time when it comes to fashion and style. It is what it is.

Dwain did not comment on my time keeping at all.  He was friendly and laughed easily.  In that respect, it was like hanging out with one of my brothers or male cousins – lots of laughter, jokes and teasing. He even introduced us to the elite athlete Asha Philip, no less, which was awesome; and waited patiently while I took some photographs with her.  It would appear that Lee Valley Athletics Centre is the place where you can bump into lots of elite athletes quietly going about their business.  It is a beautiful facility and reminds me so much of the sports complex at the University of Benin Nigeria when it was newly built – especially the outdoor track area in high summer. 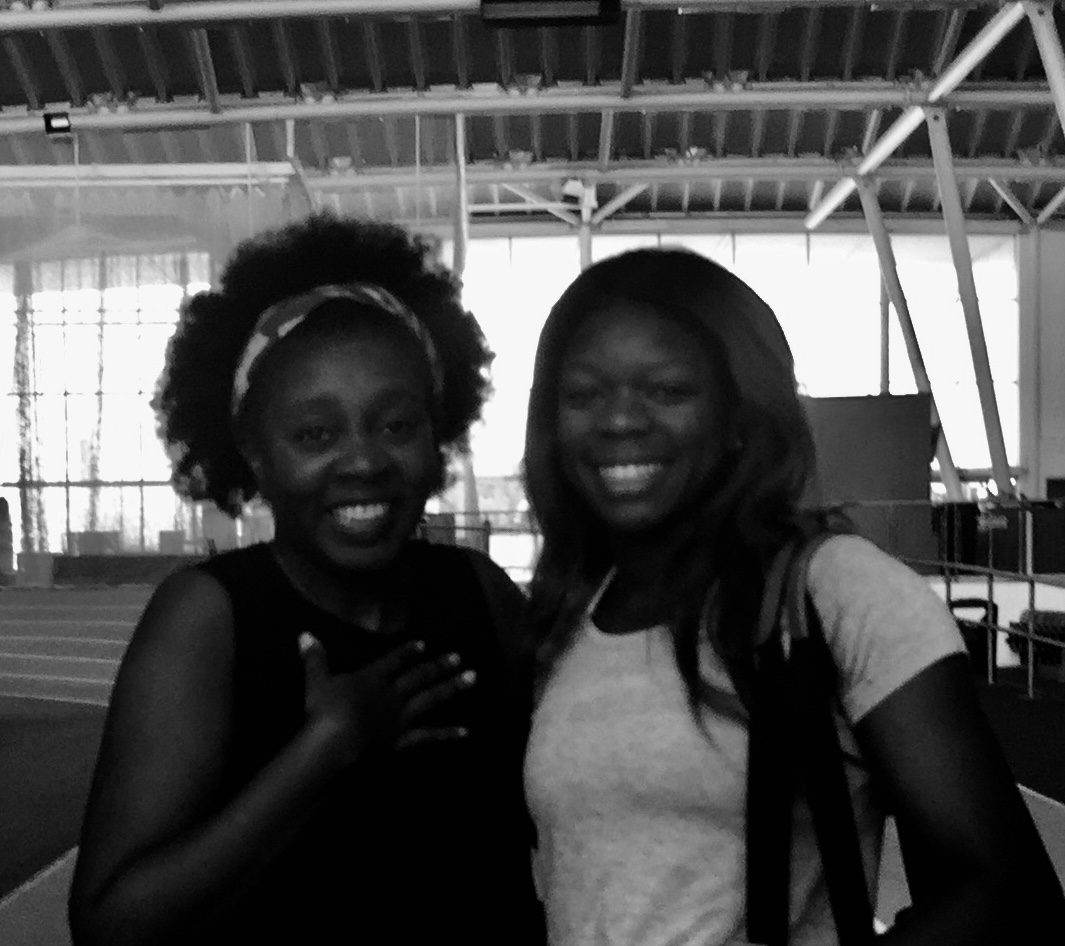 Asha Philip and I.  I looked terrible in the original photographs hence the black and white.  Asha, as you would expect, looked great.  You can see better photographs of Asha via a Google search starting with her Wikipedia page as follows https://en.wikipedia.org/wiki/Asha_Philip

I am embarrassed to say that I deep dived into giddy-fan-mode. I am okay at keeping my cool with celebs that I dislike.  Remind me to tell you about when I met Boris Johnson who I am not a fan of.  However, meeting celebs I actually like can be problematic like when I met Chimamanda Ngozi Adichie who I adore!  As I said, a story for another day.  I had secured some blogger access rights beforehand with Dwain’s PA so Taiwo could attend with me to take some photographs and video footage.  Taiwo was shocked at my giddy behaviour because she has known me for decades and has never known me to be prone to giddy over-emotional displays.  In addition over the years when we watch TV I am constantly in despair at over-emotional displays on TV especially when people meet celebrities. It is fair to say that Taiwo is never going to let me forget how giddy I was on the day.  I am yet to finish editing the video because I squirm with embarrassment every time I look at and listen to the footage.  I believe, however, that Taiwo was giddy too even though she will never admit it.  She claimed for instance that I ran out of storage for photographs but this turned out not to be the case and I suspect that she was a bit giddy but quiet about it, unlike me.  To this day I am still struggling with capturing photographs using screenshots of the footage which is now an excruciating process for the reason I have explained previously.  Sigh!

Dwain is a contradiction in some respects because he manages to be extremely open and friendly on the one hand while extremely guarded, closed off and watchful on the other.  In some respects, he behaves like an introvert that has adopted coping strategies to manage the more extrovert aspects of life. He seems, for instance, to cope very well in interviews and he has had some really tough ones.  I picked this up also when doing research about him beforehand.  He will talk all day about the controversies of his career even though I suspect that some of it must still hit a raw nerve but not much else is given away.  He is a proud husband and father to his kids which is another seriously appealing thing about him. He still seems passionate about running.

I was also secretly a bit worried about Dwain’s ability to train beforehand.  The fact that a person is blessed with athletic ability does not mean that they will be a good trainer.  I was worried that I would not be able to cope but Dwain scaled the training right down to my level and was slickly professional in dealing with my giddiness and pain avoidance techniques.  Guys, I thoroughly disgraced myself talking too much, not listening as attentively as I should have and dancing around.  Yes, you heard me, I danced! The DJ at the venue was on point too that day which did not help.  Dwain, however, had a plan and ensured that we stuck to it.  I like the way he explained what body parts he was targeting with each exercise.  That motivated me to try that bit harder to work on weaker parts of my body – my core and upper body for starters.  He is very generous with his knowledge gave advice throughout about diet, keeping hydrated, keeping going through tough times carefully relating this to business or even sitting exams.  He also promised to put me in touch with his nutritionist.  One of the things that has impressed me about Dwain over the years besides his brutal honesty is his fighting spirit. His non-attendance at the Olympic games of Athens in 2004 and Beijing in 2008 arguably at the peak of his career will have hurt him but I don’t doubt that like any other wounded lion he is going to find a way to channel that hurt and disappointment into something greater than Olympic medals.

Back to the training session: when I was tired of a move and attempted distraction, he skillfully ignored this and quietly insisted on completion of the exercise.  Right before the warm down, I went into a chatty mode yet again and he sweetly insisted on me completing the “warm down” run.  Why would anyone go into distraction mode when they are being trained by Dwain Chambers?  Fear, I guess.  I ran (waddled) faster than I would if I was on my own in the warm-up and was dreading running again at that speed for the warm down.  I was forced out of my comfort zone in the training session which was probably no bad thing.

I was relieved to have got through the session in one piece and carried on with the day including attending a meeting in central London later in the day.  Guys, that was a big mistake.  I was so wiped out by the end of the day and decided that for the next session I would work from home if I could not take the day of work entirely. 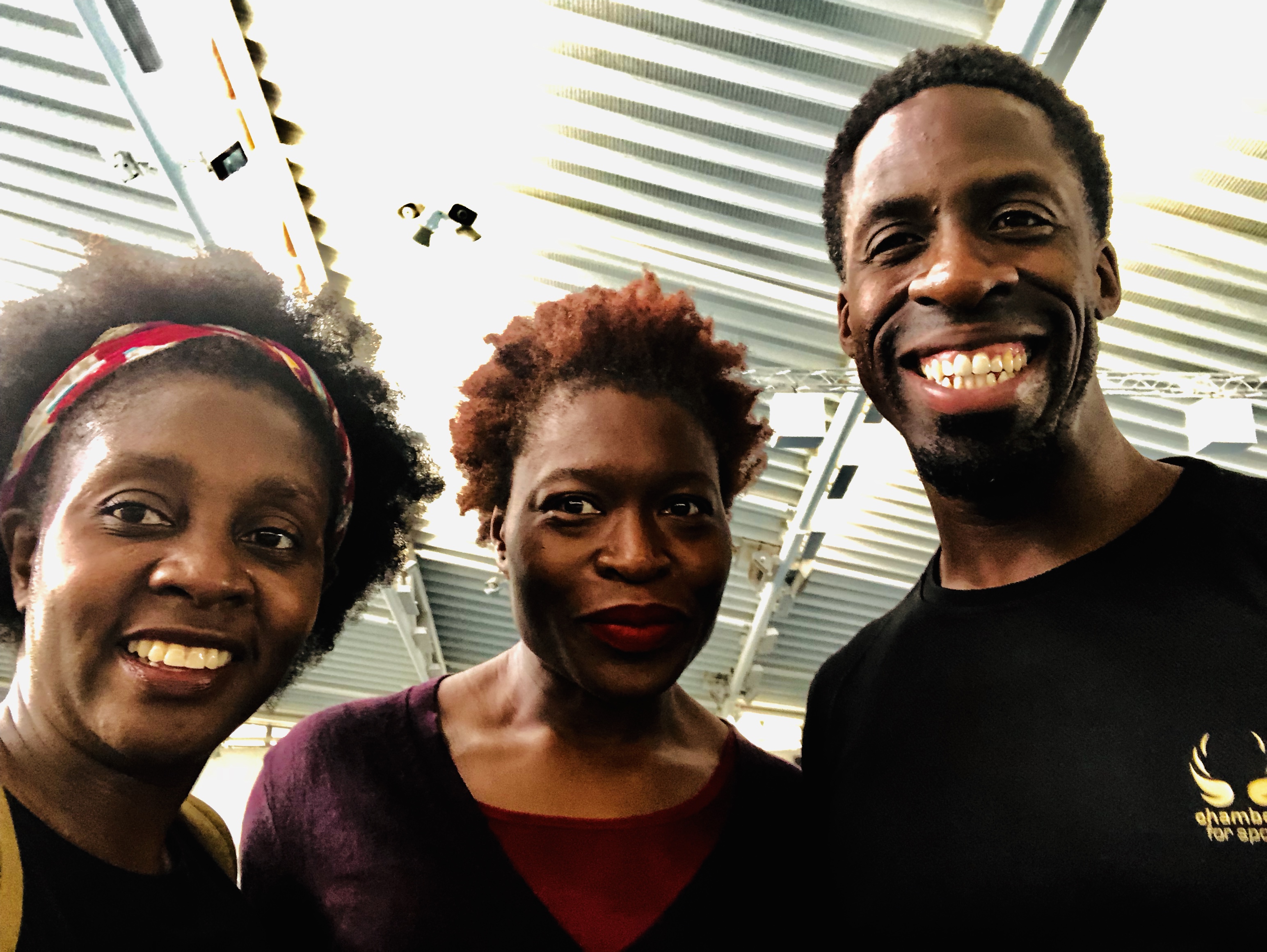 Dwain, Taiwo and I at Lee Valley Athletics Centre – Taiwo was the designated photographer of the day but I snapped this post-workout selfie.  Want to know more about Dwain? Check out his website using the following link http://www.chambersforsport.com/about-1/