A foodie weekend in Seattle, US

By JulieNovember 23, 2016Hypoxi is a waste of money and time, No to the YoYo, Uncategorized, Weight Loss Blog, Weight Loss Diary, Weight Loss Journal, Yes to stable healthy weight 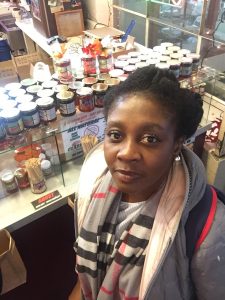 This is me in front of a stunning but bewildering array of fantastic produce at Pike Place Market, Seattle, US

Trying to eat healthily on the move generally or travelling is no mean feat generally but I think for a potential foodie like me it can be a real challenge.  In Portland, I got myself into a routine of eating healthy nutritious and mainly vegetarian food along with fish from time to time – mainly salmon and sardines.  However, no trip to a new place is complete without trying the local cuisine so I was on the lookout for an opportunity and that arrived once I received an invitation from a childhood friend to visit Seattle. I had not planned to travel by bus as I was worried about not having access to WiFi, however, I found a company that runs a service called the Bolt Bus.https://www.boltbus.com  I was able to buy my ticket online but was told on my arrival that I had to join the bus from an appointed location on a sidewalk.  This initially made me panic but I calmed down once I found other passengers who assured me that it was a good service.  They were right, the journey was smooth, the driver friendly and we arrived about 5 or 10 minutes ahead of the scheduled time so just under 3 hours.  The other thing I should say is that while the train to Seattle might have cost $45 the Bolt Bus cost about $27 including card fees.  I had to purchase my ticket using a friend’s credit card as the website would not accept my UK card. I took a packed lunch with me to help me avoid my usual pitfalls i.e. telling myself that I had no option but to eat a massive cheeseburger and fries etc.  I took healthy food with me and did not finish it all on the coach journey so had to store the leftovers in the family fridge on arrival.

That evening I tried Chinese fried rice with Mongolian beef and found it delicious.  I also had some delicious American liquor called Crown Royal Apple. If we are supposed to eat healthily 80% of the time and have treats 20% I have saved up a few credits over the year and was more than happy to blow them socialising with precious old friends and family. 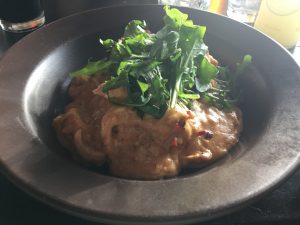 Saturday was my first full day away from Portland and we went to a restaurant in Pike Place area and had my first meal of chicken gravy and biscuits.  The biscuits are a the bottom of the gravy and taste like buttery, savoury croissants.  The gravy itself was thick and tasty.  I would have been happy to eat half the meal and take out the other half but I did not fancy carrying a box of takeaway with gravy around with me sightseeing so I eat it at the table and washed this down with a lemonade.  I found out as we walked around that the lemonade was from the local area and called Rachel’s Ginger Beer. http://rachelsgingerbeer.com I liked it because it was not too sweet or fizzy and the ingredients tasted natural. I snacked on quite a lot of nuts for the rest of the day and enjoyed a gin and tonic which was not slimline! 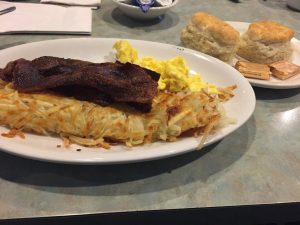 Sunday was another big day with me attending a big American breakfast with 3 generations of the family at http://www.glacierlanes.com and the above is a photograph of my breakfast which I was determined to be as traditionally American as possible with hash browns.  You can see that these are rolled up on my plate like my homemade pancakes and the bacon which is prepared like what we call crispy bacon in the UK.  I also had scrambled eggs and biscuits which tasted like savoury scones.  This is the sort of establishment that I have seen on TV several times with friendly staff and lots jokes and warm hospitality.  They did not disappoint and we had a memorable breakfast! 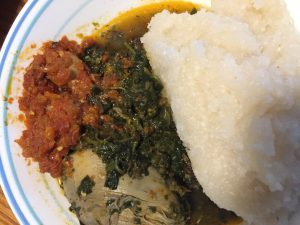 Chicken with efo soup and eba

On Sunday evening I returned to Nigerian cuisine with Efo soup made with efo and chicken.  Besides me finding my meal delicious and polishing off a huge portion of eba as you will see from the photograph above, I think it also explains why a good number of women of my mother’s generation look so good.  My friend’s mother who prepared the meal is a case in point but more on that later when I look at who to improve traditional Nigerian meals using update to date knowledge about nutrition.