World Championships, London 2017: Has Bolt in bowing out with a bronze saved his sport?

By JulieAugust 6, 2017No to the YoYo, Uncategorized, Weight Loss Blog 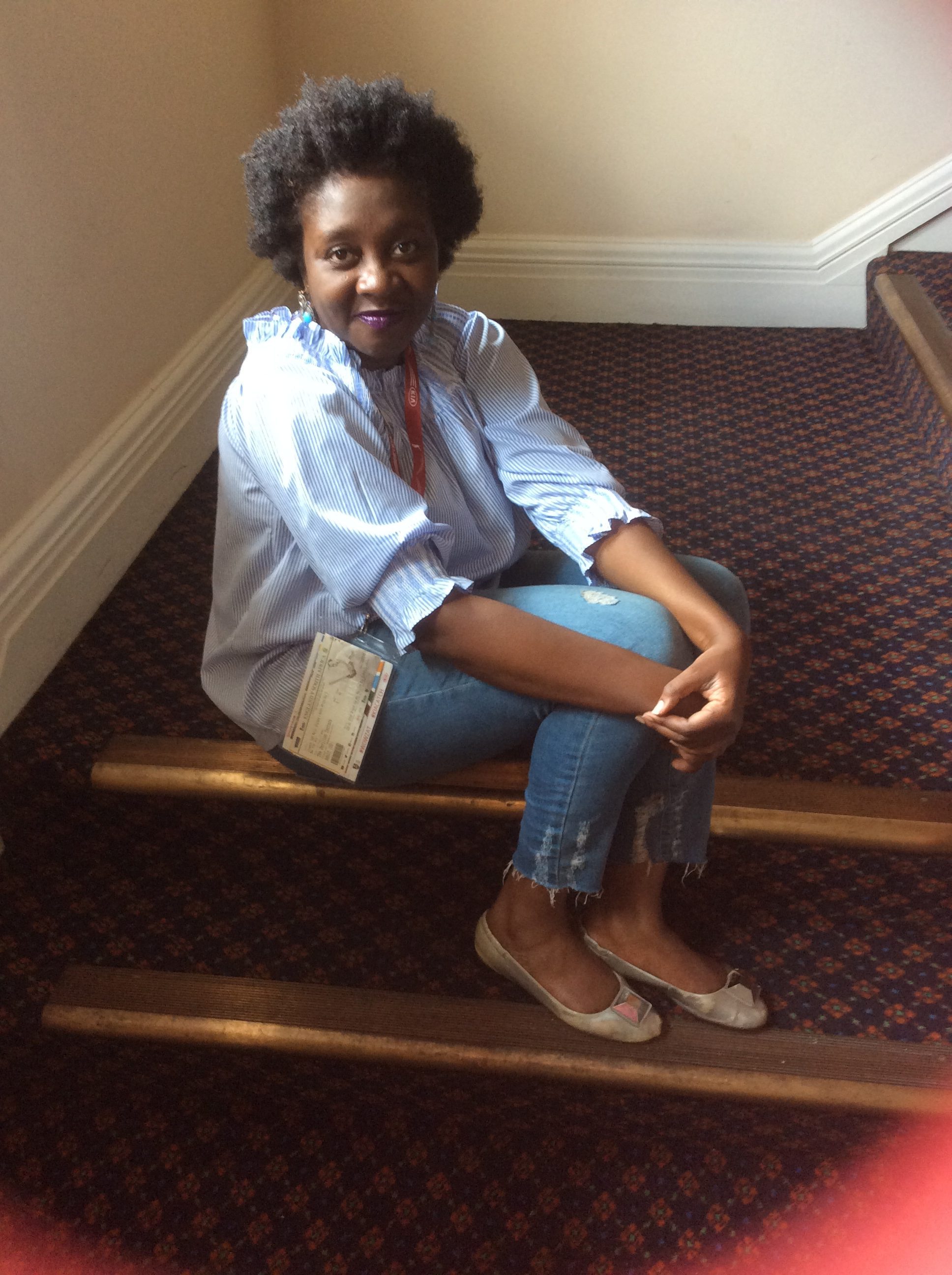 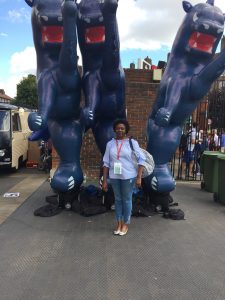 On arrival at the Oval Cricket Ground on 31 July 2017, I decided to pose for a photograph with the 3 England Lions

Today I weigh 178lbs: Still no change in my weight.

I dream of the day that I reach my weight loss goal and adopt healthy eating habits for life to maintain my new figure. How would you feel looking at my before and after photographs? You might want me to share the secrets of my success. Yes? Hold that thought until you read this blog to the end.

The Olympics of 2012 was magical for us Brits and Londoners in particular. It was another rainy British summer and all the news about preparation leading up to it was gloomy – e.g. contractors not finishing on time at the new Queen Elizabeth Stadium, complaints that Londoners with businesses near the stadium would not benefit from the development, the weather not being on our side (why was this was a surprise to us given our usual inclement weather, you may well ask!) and so on. However, the mood changed a few days before the start of the games and Brits seemed to really get behind it. This positive mood was further galvanized by Danny Boyle’s wonderful opening ceremony which replaced all lingering gloom with excitement and national pride. I will never forget super Saturday with Ennis, Farah, and Rutherford winning gold. It was exciting to see so many wonderful performances by British athletes.

Fast forward five years on to the IAAF World Championship games being hosted at the same Queen Elizabeth Stadium in Stratford, London. On Friday 4 August 2017 Mo Farah took on a group of seriously accomplished African runners in the 10,000 meters race. We have all seen some of these talented African middle distance runners get their tactics wrong leaving Mo to sprint to victory time and time again over last 6 years. This time Mo’s competitors came prepared and kept throwing in little surges of speed throughout the race. They were not going to give him a comfortable even paced race allowing him to change gears on the last lap and sprint to victory. They were going to run the legs off him. At one point in the race, Mo tripped. My heart was in my mouth and I was screaming the house down. But Mo won. Thank goodness!

Jessica Ennis is now married and her new surname is Ennis-Hill. She is also pregnant with her second child and retired. Greg Rutherford is recovering from an injury so there was no chance of either of them joining Farah in a new GB gold rush. As it was clear that there would be no repeat of super Saturday my attention then turned to the next significant event being the 100 meters men’s final with Usain Bolt. As I watched Bolt progress through the rounds, I could see that he seemed nervous and unsure but I hoped against hope that he would pull it out of the bag come the final. Apparently, Bolt alluded in an interview to problems with his start. Sadly, Usain was right and on the night he came in with a bronze. I wanted him to win gold but I am happy that he will not go home empty handed. We were cheated out of our fairy tale ending but it does not take away from the fact that Bolt is a legend. He has had a wonderful career so far and I suspect that great things await him in his next career and future. 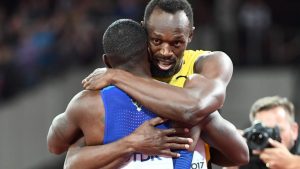 Justin Gatlin was booed roundly by the crowd each time he has made an appearance and his winning gold is problematic. It is true that he has served his ban and demonstrated remorse according to his supporters. We all know that even athletes who dope must still put in the work so it is not surprising that his supporters also argue that his achievement in finally beating Bolt at the age of 35 demonstrates patience, application and is massive. However, there is the school of thought that argues that athletes who dope continue to reap the benefits even after they stop doping meaning that the advantage that they gain when they cheat is permanent. If science was to prove that Gatlin is still enjoying the benefits of having previously doped, the real gold medal winner is Gatlin’s fellow American, Christian Coleman, and Usain Bolt would be upgraded to silver.

If Christian Coleman had won gold rather than Gatlin; it would have been less problematic and seen as a changing of the guard. In my view, there should have been a zero tolerance policy and Gatlin’s career should have ended once he was found to have doped the first time. I also think that the crowd should boo every athlete that has been involved in doping including Gatlin.

I love watching athletics and can see that a lot of sports men and women make a huge sacrifice for their sport. When they are cheated out of medals they should have won fairly and squarely it has a massive impact on their lives. If I was an athlete I would want to be awarded my medal at the actual ceremony rather than years down the line after a drug cheat has been uncovered. Jessica Ennis-Hill was beaten into silver by Tatyana Chernova in Daegu six years ago – only for the Russian to be found to have cheated by taking drugs to improve her performance. Jessica was given her gold medal in a ceremony that took place during the current games.

Justin Gatlin’s initial reaction to his win when he shushed the London crowd was looked odd in my view, but he sounded more measured in one TV interview I partly watched. Now that he has won this gold medal, he would be well advised to dedicate it to eradicating doping in sport. I would like to see him become the poster child for a zero tolerance policy for doping in sport. The alternative to a zero tolerance policy is that the race to the bottom will continue. The best athletes will be those prepared to put their health on the line by taking drugs or those who can afford the best drugs will have the best performances. If that is the case, then what about the sportsmen and women those choose not to take drugs – should they be excluded from competing because they do not want to dope? Personally, I would not want to be a spectator watching doped up athletes.

It is true that a lot of people are angry with Justin Gatlin because he beat our idol, Usain Bolt. But there was a time I liked and respected Justin Gatlin. I know how hard life is for African Americans along with other black people around the world so I support and root for them when they do well and was sad to hear that Gatlin got involved in doping. Gatlin’s involvement in doping is a loss for black people the world over as we do not have our fair share of black icons to start with. As things stand, it has just deepened my respect for Usain Bolt for being prepared to put his reputation at risk by NOT winning gold. This might prove to be Bolt’s biggest contribution to the sport because Gatlin’s elevation to gold has put the problem in the global spotlight.

This is nearly the end of this blog and takes me back to the question I asked above. Would you want me to share the secrets of my success with you once I reached my goal weight? What if I shared some diet and exercise advice with you to help you on your weight loss journey and then you later found out that I achieved my success by taking diet pills and having liposuction? I have nothing against liposuction or even diet pills for that matter provided they were safe and truly health enhancing but don’t think it would be fair to pass it off as my hard work in the gym when it wasn’t. The question of cheating, whether by doping or other means, is relevant in all aspects of life including this weight loss blog. I am all for forgiveness but our failure to adopt a zero tolerance policy will have wider implications than we think. 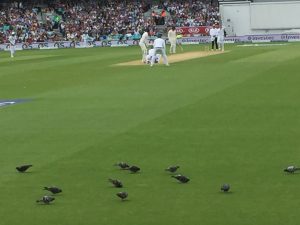 The World Championships has been a welcome distraction from my exercise routine. I started July really well and was packing in the miles at a steady pace. Work and training courses got in the way and I have had to take a few breaks. I took 5-ish days off, for instance, to watch Test cricket at the Oval Cricket ground. I also watched the England women’s cricket team win at Lord’s Cricket Ground against a fabulous India women’s team. On return to work, I had a mountain of emails to deal with that kept me away from my usual workout routine. I have however tried to wear my pedometer most days to ensure I take more than 10,000 steps per day so hopefully, that has helped me maintain fitness.

More about my current exercise routine in my next blog. 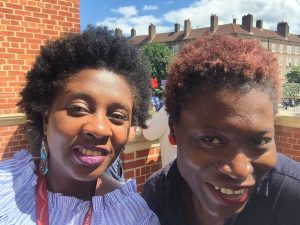