By JulieMarch 3, 2018Avoid Vanessa Whitaker & Deborah Bligh of Social Buzzing and others that abuse the People Per Hour platform, Weight Loss Blog 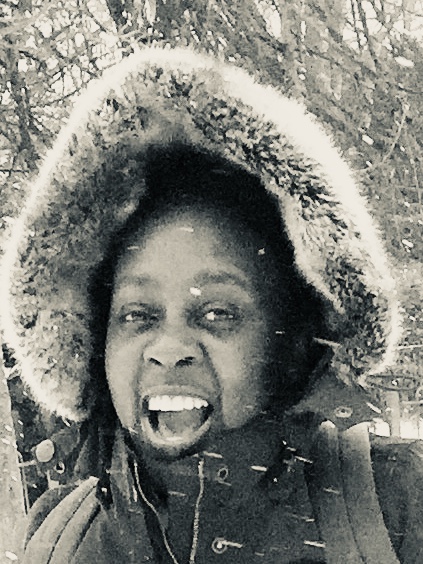 Date: Saturday 3 March 2018
Current weight: 154 lbs (2lbs up!) It has been a stressful week and as we all know, high stress = increased cortisol levels = no weight loss + weight gain

Fellow bloggers will know that blogging though fun can be time-consuming and from time to time we all wish we could have more help. To that end, I posted a job on a website called People Per Hour (PPH). Vanessa Whitaker of Social Buzzing first contacted me on 7 February via the PPH portal.  The long and short of it that I paid £419.94 on Friday 23 February but by Tuesday 27 February I had seen enough to decide to part company with Social Buzzing. If you want to read about the details of my ordeal with then please look out for a fuller post setting out all the details.  For now, my advice to anyone out there who wishes to avoid my terrible experience would be to do the following:

1. Go for a trial or probation period: Go for no more than a monthly contract if you can and if possible a week on week basis depending on the work you want to be carried out. If you have to go for a longer period, for instance, 3 or 6 months then make sure negotiate a probation period within that time so you can give notice and leave with minimal expense if you decide that you cannot work with them.

3. Make your payment via PayPal or a credit card: In my case, the company pressured me to set up a direct debit from my bank account when I had wanted to pay by credit card for the added consumer protection. When I stuck to my grounds, they sent me a link to make payment via Paypal. As I am allowed to raise a dispute within 180 days of the transaction and have done so and look forward to receiving a full refund.

4. Do your research and due diligence: If I had carried out careful research I would have found out that Social Buzzing has been accused of scamming their clients. One former client described the company as modern thieves and said that they did shoddy work. While I accept that even the best run businesses can end up on the wrong end of a complaint, the manner in which complaint is dealt with is telling and Social Buzzing carried on deducting monthly sums from their former client’s bank account on the basis that it was up to the former client to have cancelled the payments. A reputable company would have refunded the money to their former client once they received notice rather than claim that as the money was coming in they thought it was okay to ignore the notice and carry on producing work that the former client had already indicated that they were unhappy with. For me, a so-called social media expert company with a tarnished online reputation would have been a deal breaker.

5. Report to the police One of the managing directors, Deborah Bligh, told me that Social Buzzing has had lots of experience dealing with Action Fraud and the prospect of my reporting them to the police did not bother them at all as nothing would come of it. I ignored her advice and made the report to Action Fraud and you should too if you ever find yourself in this unenviable position. It makes it more difficult for fresh victims to be targeted.

6. Report to People Per Hour: I realise now that as soon as negotiations moved off the PPH website, I should have moved them back on. In any event, I have reported the matter to PPH as none of the work I paid for has been carried out and I am cooperating with PPH fully by providing all the evidence they require to investigate my complaint. PPH has said that they will do their best to get me a refund but cannot make any promises as the transaction occurred outside their platform in breach of their terms and conditions.  However, as I mentioned above, I have also raised a dispute via PayPal.

7. Make contact with other clients that have complained: I am reaching out to former clients who have made complaints to find out how they have resolved matters if at all they have done so.

8. Trust your gut instincts: I agonised over going with Social Buzzing and pulled out twice. I regret not following my gut instincts.

So where does that leave my weight loss journey for the week? I dread to think what this has done for my cortisol levels. The time and energy expended reporting the matter to the relevant authorities, changing all my passwords and so on has taken the focus away from of my weight loss journey in the worst possible way and the snowy weather has had a negative impact on my gym attendance.

My plan going forward is to get back to the gym and exercise generally and back my eating programme today. If the snow weather means that the roads and footpaths remain treacherous then I plan to pull out my old work out videos and DVDs. It is time to press the reset button following a shocking week.

I had to take some photographs to mark the unusually cold weather brought to us from Russia (no doubt with love!) and dubbed The Beast from the East by the media.  Plus it was an excuse to wear my pink paisley wellies! 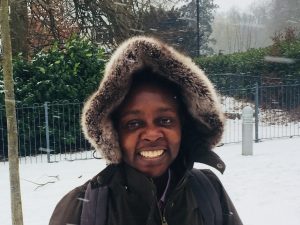 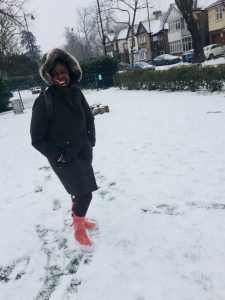 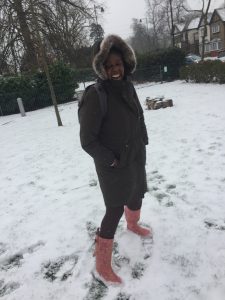 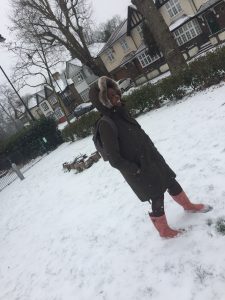